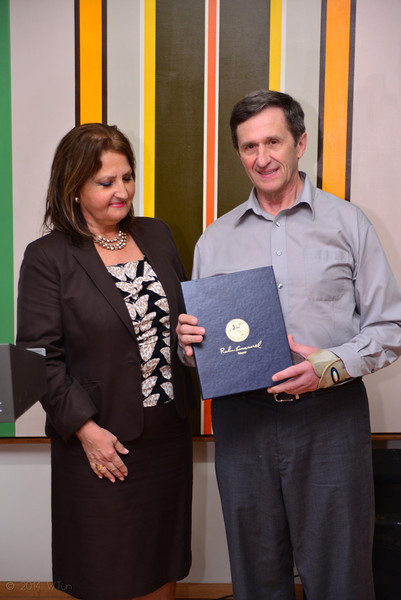 Chicago Kyiv Sister City Committee Chairperson Vera Eliashevsky presents a statement of recognition & honor from the city of Chicago to George Sajewych for his role in defending & supporting the people on Maidan.
Recognition presented at: MAIDAN: A PERSONAL PERSPECTIVE
Guest Speaker: George Sajewych
hosted by Chicago Business & Professional Group.
Retired journalist George Sajewych described his experiences during the protests on Maidan in Kyiv earlier this year that brought down the corrupt government of Viktor Yanukovych. A volunteer with the self defense units protecting the protesters, George was badly injured during the violent anti-Maidan crackdown on February 18. Saved by the motorcycle helmet he was wearing, and suffering from a broken arm and a concussion, George underwent surgery and was treated in a hospital in Kyiv.

Prior to retirement, George was a journalist and producer with Voice of America and a professional interpreter for U.S. delegations to Ukraine. He had served as interpreter for Presidents Clinton, Vice President Gore, Secretaries of State Christopher and Baker and for numerous other U.S. officials and delegations.

George is making a short stop in Chicago, where he grew up, before returning to Ukraine to help in the defense effort against Russian aggression.